THE PEOPLE OF NGORONGORO

Ngorongoro, with its famous Olduvai Gorge, is often referred to as the cradle of mankind. Here, various hominid species have replaced each other and, more recently, different ethnic groups have contested for this rich savannah landscape on the eastern part of the Serengeti ecosystem.

Maasai and their livestock wandered into this area around 200 years ago. They pushed off the Datooga, also known as Barabaig, who remain as a minority in the east and south of the Ngorongoro Conservation Area. Both peoples are traditional pastoralists, living almost solely on their livestock, which they revere above anything else. Traditionally, these pastoralists were nomadic, moving with their livestock in a continuous search for grass and water. They have since become more settled as they are now obliged to attend school or require regular services of health clinics. Additionally, these peoples have less available space as their populations increase within the limited landscape of NCA. While permitted to live in Ngorongoro, they do not have any formal rights to this land, nor are they allowed to cultivate. 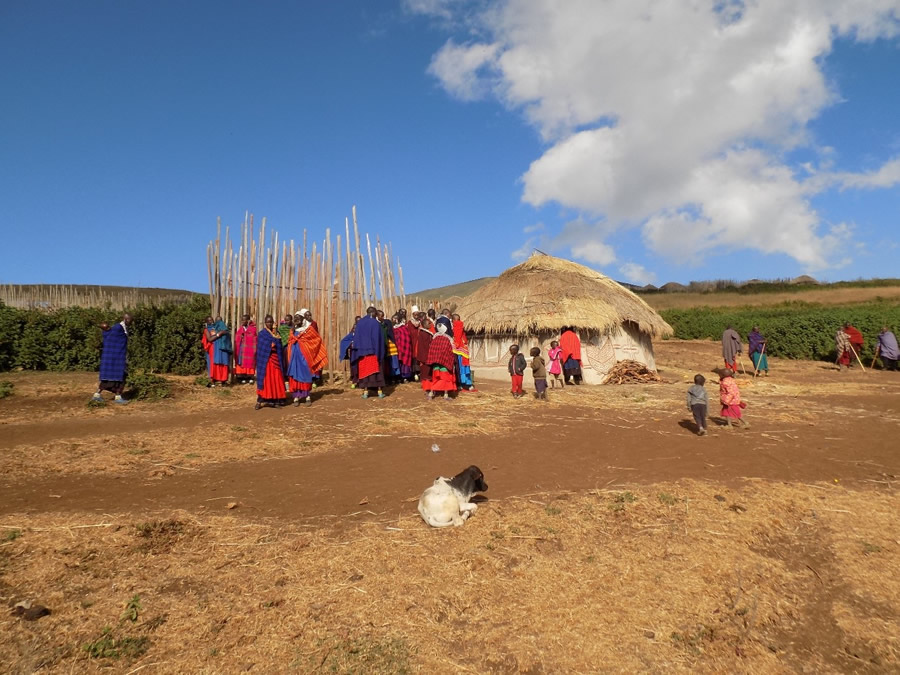 Maasai are the best-known of the ethnic groups in Ngorongoro, and today they make up 98% of the resident population. The remaining 2% are Datooga, in addition to very few Hadzabe families who live on the very edge of Ngorongoro by Lake Eyasi.

Ngorongoro Conservation Area, NCA, was gazetted in 1959 as a multiple-use landscape, where wildlife and traditional pastoralist could continue their co-existence. Since then, the human population has increased more than 10-fold, mainly through natural growth. Immigration into the area is not permitted. Meanwhile, their livestock, which is their main livelihood, have remained almost constant – resulting in fewer livestock per capita. While a few herders own massive herds, the vast majority of the families live well below poverty levels, and under increasing need for outside food and livelihood support.

Maasai live rather harmoniously with wildlife. Their cows and wild zebras often graze side by side, and relaxed giraffe are often seen wandering right by the Maasai homesteads. Cultural taboos of the Maasai promote conservation. In their culture, it is a taboo to consume wildlife meat, kill animals that are not harmful, kill anything without a good reason, and to cut down live trees. In addition, many wildlife species belong to certain Maasai clans, rendering them a certain respect and protection. As everywhere in the world, however, these customs are weakening. 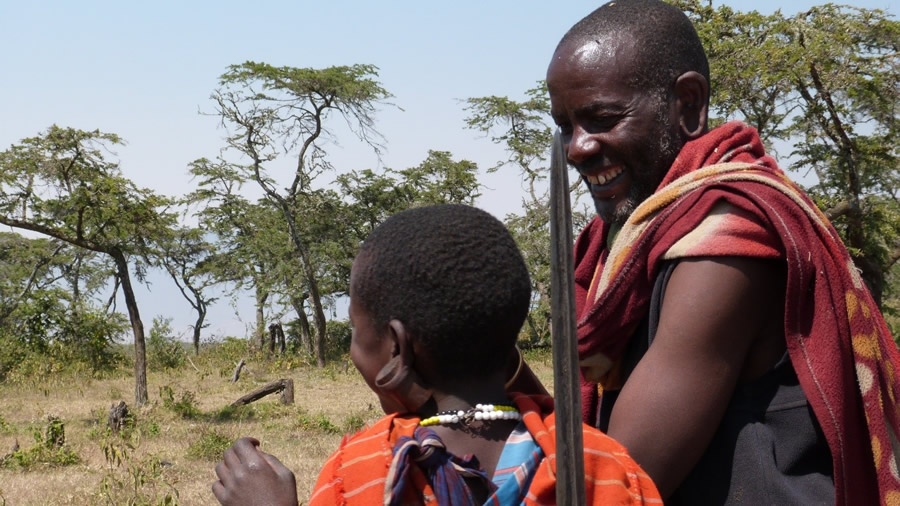 Maasai’s relation to the lion is ambiguous; a relationship of love and hate, fear and admiration that goes back millennia. Of the large predators – lion, leopard, hyena, and cheetah – it is the lion who runs the greatest risk of being killed by the Maasai, despite the fact that the other predators account for most of the killed livestock. This is because lions are more likely to attack the most valued livestock, cattle. Further, other predators are shyer and more able to slip away after a livestock attack. In contrast, a lion often stays with the kill to guard it, and is more inclined to go on the defensive when challenged. On top of this, killing a lion is the ultimate show of bravery for a Maasai warrior. The warriors that set the first or second spear in a lion get celebrated and gain special respect and admiration in his community.

For a Maasai warrior, Ngorongoro has been a mecca for ritual lion hunts, so-called Olamayio (or Alamayo). In the rainy season, the vast short-grass plains of the east Serengeti ecosystem fill with the great migration of wildebeest, zebra, gazelles and elands, attracting numerous lions from the neighbouring Serengeti National Park and the Ngorongoro Crater for a feeding frenzy on the massive herbivore herds. These lions are naïve to danger from people, and they are ridiculously full-bellied and lazy. Many of these visiting male lions live in cool temperatures, allowing them to boast massive manes – a top trophy for a ritual lion hunt.

Killing a lion was a passage to adulthood, but now times are changing

Over the years a great number of lions have seen their fate on these plains. In years when a new age-set of young Maasai men have been given warrior authority, which happens every 10-15 years, there is usually a spike in Olamayio killings as these new warriors seek their claim to fame.

The Datooga, like the Maasai, depend upon and highly value their livestock, and have a similar relationship with lions. As a rite of passage, a Datooga warrior should spear a dangerous game, being a lion, buffalo, elephant, rhino or leopard. This will also bring him gifts, usually in the form of livestock. Only stabbing a spear in the dangerous animal is enough and they don’t have to kill the animal to reap the benefits. They are known as possibly even more fearsome warriors and skilled animal trackers compared to their Maasai neighbours. 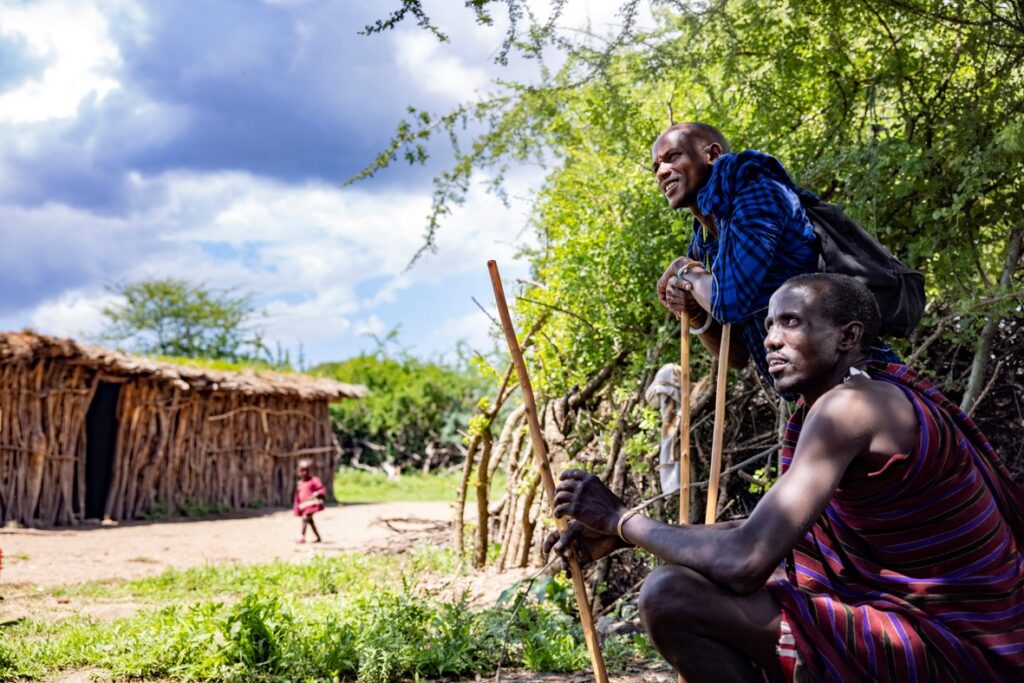 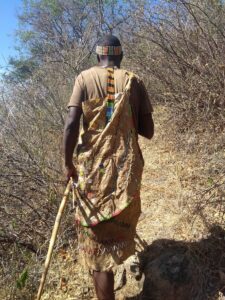 Hadzabe – some of the last remaining hunter-gatherers in Africa.

The Hadzabe people are an indigenous ethnic group of hunter-gatherers, in dwindling numbers, that are also recognized among the Ngorongoro residents. They occupied parts of greater Serengeti in sparse numbers well before the other pastoralist peoples wandered in here. As in many other places, these people living directly off the land were easily pushed out by more dominant tribes. Today there may be less than 100 Hadzabe, a few families, living within the borders of Ngorongoro Conservation Area. The rest of this small group live in the neighbouring area by Lake Eyasi. They are reknown for their intimate relationship with the land and the wildlife, and for their superior spoor-tracking skills.