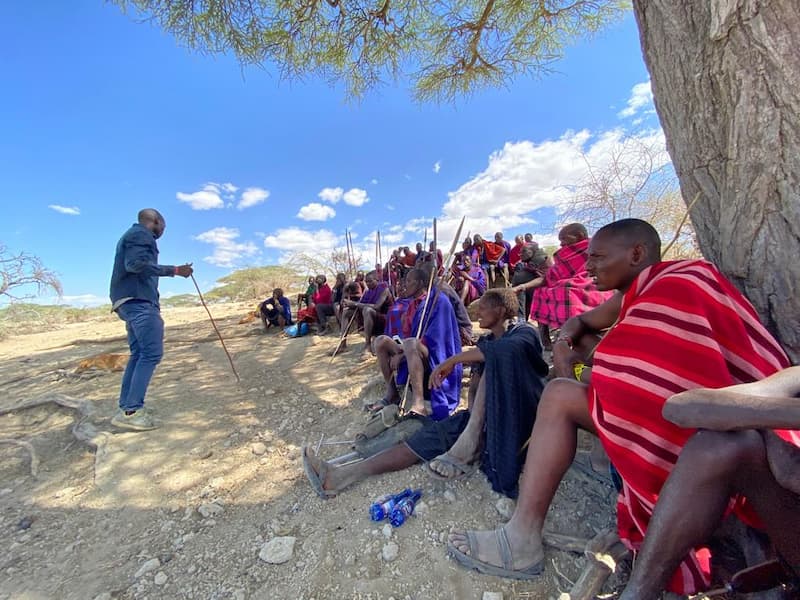 Roimen and Mussa talk with the Nyangulo (the warrior age set) in Ndutu, Ngorongoro.

Roimen and Mussa talk with the Nyangulo (the warrior age set) in Ndutu, Ngorongoro.

It’s #GivingTuesday today, and after a whirlwind of a year for KopeLion, we’d like to say thanks for all the support that we’ve received from everyone, our donors, supporters, our hardworking team, the authorities we work closely with, the Ngorongoro community, and those who say, ‘well done’, ‘sorry’ or simply listen.

Please keep supporting the work we do, as we expand to a second corridor creating tolerance towards lions and their connectivity in and out of Ngorongoro Conservation Area, and enable the lasting coexistence between people and lions.

With warmest wishes for the giving season,

The big takeaway for us this year is that the trust is there. Despite immense conflict, loss of livestock to predators, and many lions being caught up in battles for survival through drought and tough times, pastoralists in Ngorongoro are engaging with us and with lion conservation.

We are truly appreciative for the words of Esere village members which remind us that there are still potentially far better things ahead than those that we leave behind.

“KopeLion have proven beyond doubt that agreements can be honored between parties and that you can keep your word. Ilchokuti and their work is living proof that indeed KopeLion is at our service and is a dependable organ.”

This year, these activities have kept us busy! While we aimed to reduce the levels of lion attacks at pasture and in homesteads, we’ve unfortunately dealt with the opposite, with such scarcity of resources in this dry year bringing lions and people closer.

It’s hard to measure the conflict that been prevented, but as an elder with livestock in the Ndutu areas stated last month, “Had it not been for the great commitment by KopeLion we would have been in disarray with the lions.”

Thanks to IUCN SOS and EU Partnerships and PAW Foundation we’ve shared the work and costs to strengthen homesteads using traditional means in fitting with the conservation area regulations, we’ve made two films on location that remind people about the many ways and traditions that keep them safer when herding and at night, and we’ve shared thoughts and discussed safety through large, focused meetings with all 15 of the villages we work with.

Our CIP trial, paying communities for the presence of lions, is now in its 3rd and final year, and we’re documenting lions spending longer times in these 6 village areas, indicating that its working and tolerance to lions is increasing.

We’ve produced a ‘Living with Lions’ book with PAMS Foundation and WildAid, organised for educational materials for safety with wildlife, and taken 100 children into the crater to learn more about lions and have fun!

We’ve lost some old favourite’s this year, in self defence, in battles with other lions and buffalo, and in retaliation. There were a couple who were particularly close to many of our team and the communities that we’d wish to remember:

Laipangwa, haunted the Nomad Entamanu camp for several years, and gracefully wore his collar, sponsored by Safina Conservation Fund, so that we could keep track of him and his ladies. He was a lion who had survived many tragedies and grew special, with even the children asking where he was. After losing his signal, after some days we found his body in a deep valley with signs that it had been mauled by other lions.

Noongoile, whom we had managed to keep out of danger for so many years as she lived almost within the people around the crater rim, was killed in self-defense, one early morning, finally getting just too close to a boma and children.

But with the losses comes change and opportunity for others. We’re seeing many new lions, with Emmanuel doing regular nights call ups and setting camera traps in the south- western area of NCA, as well as recording regular signs of their traversing through the community areas.

While the crater prides remain with the still strong Lake Quintet coalition (and some sneaky visits from the big black bellied Kalamas), takeovers have ensued, as always, in the Ndutu prides, cubs have amazingly survived the drought, and young hot-blooded teams of males have arrived from the Serengeti.

We have 5 new collars at the ready and we’re working closely with the NCA Authorities and the research project to select and collar the most interesting individuals to watch their travels and use them as a vital tool for giving early warning of their presence, preventing conflict and keeping them safe. 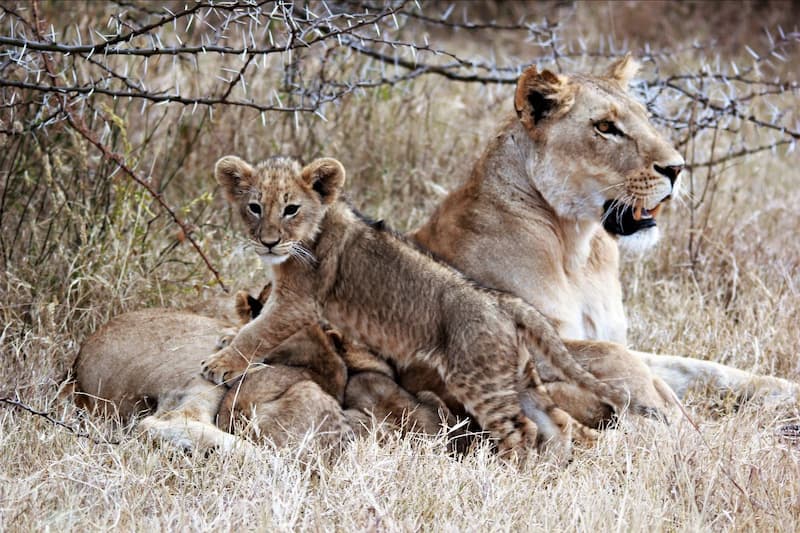 It takes a team!Early warning of lion presence using GPS collars is such an important tool for supporting pastoralist communities in Ngorongoro to live with lions. The Ngorongoro lion research team together with Dr Wambura from NCAA and KopeLion Ilchokuti yesterday succeeded in collaring Lemiko (8yr old male) and LK124 (7 yr old female), both of whom originate from the crater but who have settled, with their pride, in the Esere plains.Emmanuel Lufilisha (Research Assistant) has been watching them for some months and his patience finally paid off. KopeLion partner with the research project to support human wildlife coexistence in Ngorongoro.@iucnsos IUCN Save Our Species @eu_partnerships EU International Partnerships @lionrecovery Lion Recovery Fund NABU International @pawfdn @lincolnparkzoo Lincoln Park Zoo @pman1056 Puneet Mansharamani @dm_wambura @emmaboycharle Roimen Lelya @lelyaroimen @ngorongoro_crater Ngorongoro #ngorongorolions #livingwithlions #ngorongoroconservationarea #lionconservation #humanlioncoexistence #ngorongoro #ngorongorocrater #communityconservation #corridotoftolerance ... See MoreSee Less